Daniel has gone to BKK to pick up the bralettes!👏🏻👏🏻

HELLO WOMAN WHY ARE YOU SO BLOODY FLAKY. Enough of your nonsense!!! 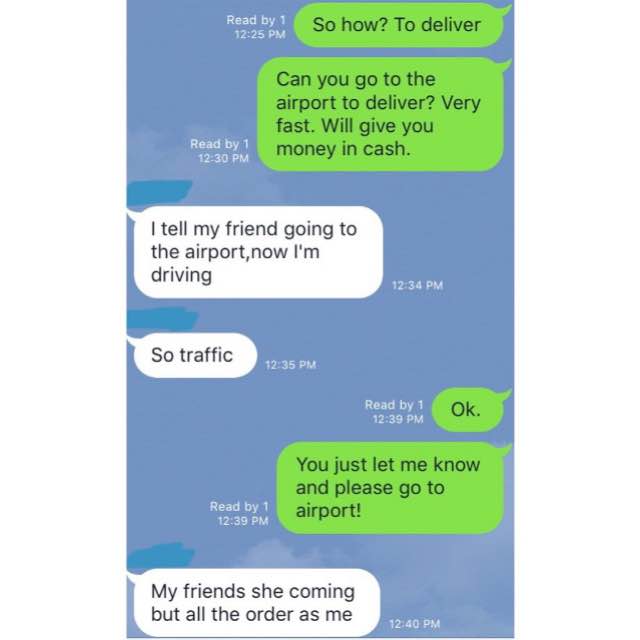 Sometimes, I don't even know what's going on anymore haha. 😂😂

Really don't know whether to laugh or cry. She wants her friend to go to the airport. But the bralettes are with her…then…?

Finally persuaded her to go to DMK but she'll reach at 2 instead of 1230 which is the original meeting time. Lucky I booked a late flight for fatty ng to come back. Imagine if we really thought she would come at 1230. I would have shot myself.

And now the wait begins. He's damn funny. Waiting at the departure hall at some cafe and he refuses to buy food and drinks. Just gonna sit there until someone notices and chases him away.

But he's quite confident that no one will notice.

He sent me this pic and said he freaked out cos he thought that was our stuff. LOL BRO MY BUSINESS NOT SO BIG YET. 😂😂😂😅😅😅

No wonder she didn't want to come to the airport. She only had half of the stocks. CAN YOU BE HONEST FROM THE BEGINNING????

Then she passed the stock to her friend and told her that she'll be coming to Singapore on Saturday and will bring the bralettes along with her. Daniel saw her itinerary la. So I think it's real she's coming.

Sian man. What did I do in my past life. ☹️☹️☹️ If you have bought and don't want to continue waiting, just let me know k I will refund you. No questions asked.

But according to Fatty Ng's gut feel, she is pretty trustworthy la. Her dad came down to the airport too so I guess…she must really be working super hard.

Maybe we ordered too much at one go so she couldn't produce it in time? After all, all these are handmade and she's giving me such an affordable price. 😔 So lets all be tolerant and understanding! 👏🏻👏🏻👏🏻

Ok so I guess the journey ended with 50% drama?

At least I'll be able to fulfil some orders now!

⭐️ It's easy to get mad at somebody cos you're so caught up in your own POV and have others hounding your back. ⭐️

However, it really means a lot to someone else if you can take a step back and see where they are coming from.

Someone asked if I can still trust the supplier after she has flaked on me multiple times. Truth is…I don't really know. All I know is that when I'm so close to finishing something and somehow no matter how hard I try, I still miss the deadline, I won't give up. Instead I will do everything I can to extend it or catch up. And I believe that's exactly what's happening to her.

I know the previous batch of bralettes were also hand made, but they were leftover pieces from the manufacturer. Which is why there were so little of the seafoam green and Valentine's date. This one however, was made to order.

The samples she passed me sometimes still had like measuring marks or loose fabric attached to it because it was really hand made. She sent quite a lot of photos to me and almost all of them had sewing machines, scissors and cloth samples in the background. Which is why I'm so certain that she was making them through the night.

⭐️ Your best is never enough. But we can do our best to appreciate someone else's hard work ⭐️

Do you know this supplier never ever replies me in the day? Only at night and after midnight. She always tells me that she didn't reply because she was working in the factory and driving to receive cloth samples etc. I get really frustrated when I try to contact her but can't. But sometimes I think to myself. Have I ever been so busy I never touched my phone the entire day? The answer is yes.

And I cannot imagine being that kind of busy for weeks on end just to rush out someone's order. Of course I'm super angry with her when she doesn't reply or when she makes empty promises and doesn't deliver. But truth is. I believe with almost 99% of my heart that she is trying her best.

And for that, I always try to prevent myself from being too harsh in text messages. Because everyone is having a hard time in life and we should try to look out for one another.

I think wouldn't have been so mad at her if I'd known that she only had half the stock. Similarly, I choose to post almost all aspects of our little business here because I believe that there's no point trying to hide anything la. I can tell you girls that I have in stocks but when something happens, the lie will unravel anyway.

But sometimes even being honest is not enough. So I'm really sorry for the crazy delay and hope that you girls will continue to stick around despite this. 💕

I guess I'm just thankful to have the chance to experience all these, to understand that being a small business owner isn't easy.

And also thankful that I now have a whole new perspective into what it's like to run your own show. When it doesn't matter who screws up as long as it affects your customers.

Thankfully, my customers are pretty damn nice and I can say for certain that they beat any other business hands down.

They are the kind of special who offers to speak Thai to my manufacturer even tho they are busy at work. @wlovette

They are the kind of people who offer to be my bralette unicorn🦄 and help carry stuff back while on holiday. @wishywashi @exiralc

They are the kind of people who will travel to BKK, find the same bralettes I'm selling, yet tell others to come back and buy from me. @querencia

So thank you for being Fatty Ng and my kind of special! We really appreciate all the support. 💪🏻

And sorry to disappoint again. 😭 But at least we're already halfway there!