Woke up bright, but not so early today because we're assembling some of the home stuff today! 🎉🎉

Our renovation works are almost done except for waiting for carpentry to come in and the toilet accessories to be put up and we should be good to go!!! 😍 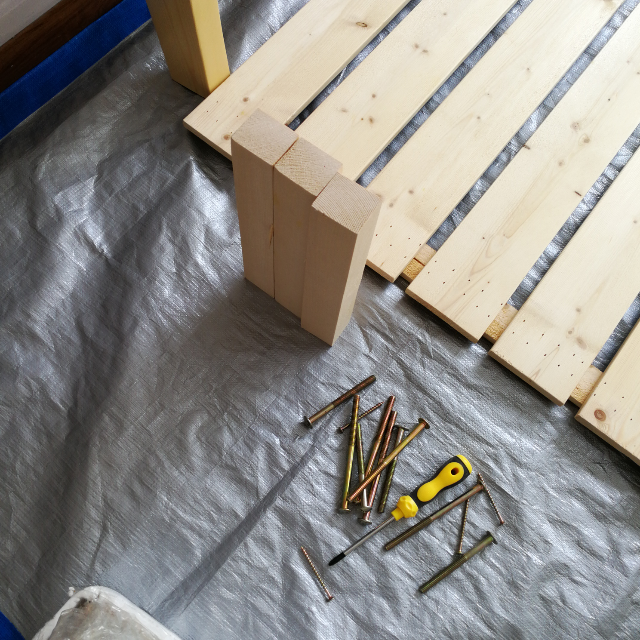 Today's agenda is bed frame and dining bench. The bed frame quality was ok, can't complain for a custom made $200 piece. 😂

It is solid wood at the frame! Can't expect the best quality, but I'll sleep on it and let you guys know how it is ok.

Not too bad feels sturdy enough!! 😍

It's a little too yellowish for our liking so I think we might stain it a little more. 😂 So far so good! Seller also very responsive cos we thought we lost a few parts but turned up it was in another box 😂😂

Check out the misaligned holes on our bench 😂😂 Taobao will be taobao.

When we asked the seller she said the holes are not there for a guide. You assemble it anyway you like it 😂

Btw the bench was also custom made, to match our dining table. This one was $80 I think!

Just need to screw in the legs into the bench.

The welding not very good ah and the holes also weird one. But oh well 😂😂 lets see how it holds up!

Subsequently we all sat on the bench (4 of us above average sized individuals ah) and it was ok!

10 points for stability. But there might be some warping in future so we might buy additional legs to add on to the middle of the bench. 😂 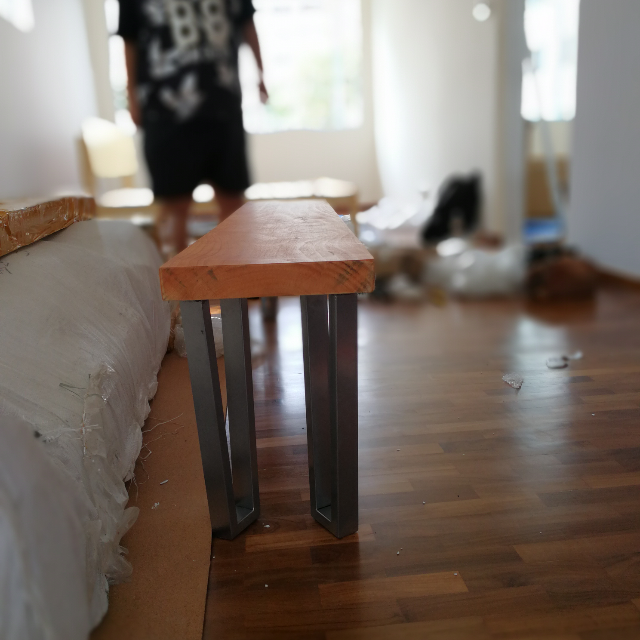 Hello little thing! Super heavy tho! Cos it's solid wood 😂

Just now, while running errands, I turned into a HDB estate to make a U-turn. And while doing that, I reversed my car into an Uber and kissed his car ever so gently. But of course, gentle kissing doesn't get you out of trouble and I ended up having to pay for his repairs at my garage.

At that moment, I remembered my brother telling me that the first time he hit someone else's car, he broke down at the roadside after exchanging details with the guy.

But at that time, I was first super annoyed and angry, at the other driver for coming into my way even though my reverse lights were on and when I was reversing. But when I got out of the car, I knew that aiya, it's my fault and there was no point arguing. Then I was overcome with a feeling of helplessness, because what has happened already happened and no matter how I feel or react, it doesn't change the fact that I had absentmindedly reversed into someone else's car.

Fastforward, after dinner and while I was dropping Bestfriend Chen and boyfriend home, my mind was…messy and distracted. I thought about why I wasn't more careful and why it had to be me and why I needed to have such a bad week (prior to this, my Yaris' alternator needed to be replaced and cost me half a thousand dollars).

Then after a good shower, I realised that. What's the point…it's all over now and there's nothing we can do anyway.

Some people get super annoyed and angry and frustrated when bad things happen, and it's only natural. I mean…who reacts to a bad day with crazy optimism immediately right? But in life, we cannot control what happens and we cannot define all the blemishes that happen.

So what to do? You move on and accept it lor. It's kind of like the concept of Wabi Sabi which I have previously mentioned with regards to my #dayrehomes experience.

The whole concept of Wabi Sabi is based on the Buddhist teaching of the Three Marks of Existence and is basically the acceptance of transience and imperfections in life.

Ordered a TV console and realised it has a few knicks on the edges during shipping? Have a few pieces of parquet that are not quite the right colour? Wabi Sabi is to not look past these tiny imperfections but to accept that they exist and are part and parcel of life.

When applied to the bigger picture, it basically means to accept the fact that everything in life is….

Which in my dictionary, translates into "this too, shall pass". No matter how bad of a day you're having, or how bad of a year you're going through, it will all pass. Nothing in life is permanent and everything is always changing.

Changing for the better or the worse, we don't know, but it's definitely not staying still.

So even if it feels like you're stuck in a huge rut and that things don't seem to be going anywhere, just know that nothing in life is permanent. And that everything is subject to decline and destruction. Your bad days? They are tiny in the grand scheme of things, but so are the good in your life.

When you realise how impermanent things are, you gradually realise that there really isn't room for great sorrow or great happiness. Since all things, even the best and worse, will pass too.

The harsh reality of realizing that every living being suffers. Because we're all prone to sickness and death, worries and pain, we are all suffering. I think this is a good reminder that you are not alone.

I interpret it as the universe's way of reminding you that when you're down and out, you're not the only one out there who's having a shitass day. Everyone has them and in the end, everyone who lives suffer.

So have a little empathy for others around you and hopefully you'll find that you're not so lonely afterall in this bigass world. I'm having a bad day and so are the thousands of others out there. We can't escape the bad because how can you see the good without it anyway? 🙂

To be honest, I don't really understand this mark yet. Which I think makes this one even more meaningful because in essence, what it means is that our understanding of the universe isn't the actual way things exist. AKA, things aren't really what we experience them to be.

I guess the word "emptiness" is to be understood as taking yourself out of an experience (removing the self) and understanding things from another perspective. It reminds me to not be too caught up in my own emotions because that's not what things really are and not how things are meant to be.

Even if you feel like poop, it's only your minute perspective and that if you remove yourself from the situation, you'll see that things aren't as bad as they seem.

To be honest, I've always felt that Buddhism isn't really a religion but a school of thought and that it isn't really based on blind faith but an understanding of teachings and agreeing with it. I don't really like to talk about religion because it can be a super sensitive topic, but this is what came to mind today and it really has nothing to do with religion and more of like…seeing things from a different perspective.

I'm not the most religious person and I'm more superstitious than I am faithful, but I do appreciate a good alternative perspective to explaining life and phenomenon and I think Buddhism itself is pretty interesting in providing a new outlook.

Yes I hold joss sticks and I kneel at temples, but I think it's not religion, but more of respect for your parent's culture and choices. But that's a whole new can of worms for another day.

But tonight, as I remember the little accident that happened, I'm happy that it gave me the opportunity to rediscover these teachings that I once briefly knew and now know a lot more about. Remember how I mentioned that I believe that the universe always has a plan? Well, I guess it took a little bit of a speed bump to reorientate my outlook in life.

And I'm sharing this because I want to be able to look back on this post on every day that I feel that life hands me the shortest straws. It is a reminder that this is the way life works and maybe then, I will begin to feel better. Even if it is just a tiny little bit.

Posted on May 6, 2017 Posted in UncategorizedTagged dayre-exported