My dayre post mysteriously disappeared yesterday after I time-warped 🙃

I was also distracted by IG yesterday because of this new nubra sample I tried but I will share about that later on. 😂

In the meantime, can I just show off my manicure from @Lebrowniec / Nailhaven on IG?!?!?! 🙃

And lucky me got a slot ✌️

I'm a horrible human and I don't have long nails 😂🙃

🙃: So what did they test you during your Japan Certification (seriously is kpo max)

And I am damn rude hor. Hahaha people bride usually go for lace and nude colours or French tips…guess what I asked for….

In the end when I visited this morning Fiona was super sweet la. She recommended that I do like a simple nudish pink design with a little bit of crystals and gold based colour mixes.

So I said ok la! But I insisted on 🍳 on my fourth finger because #chowdan 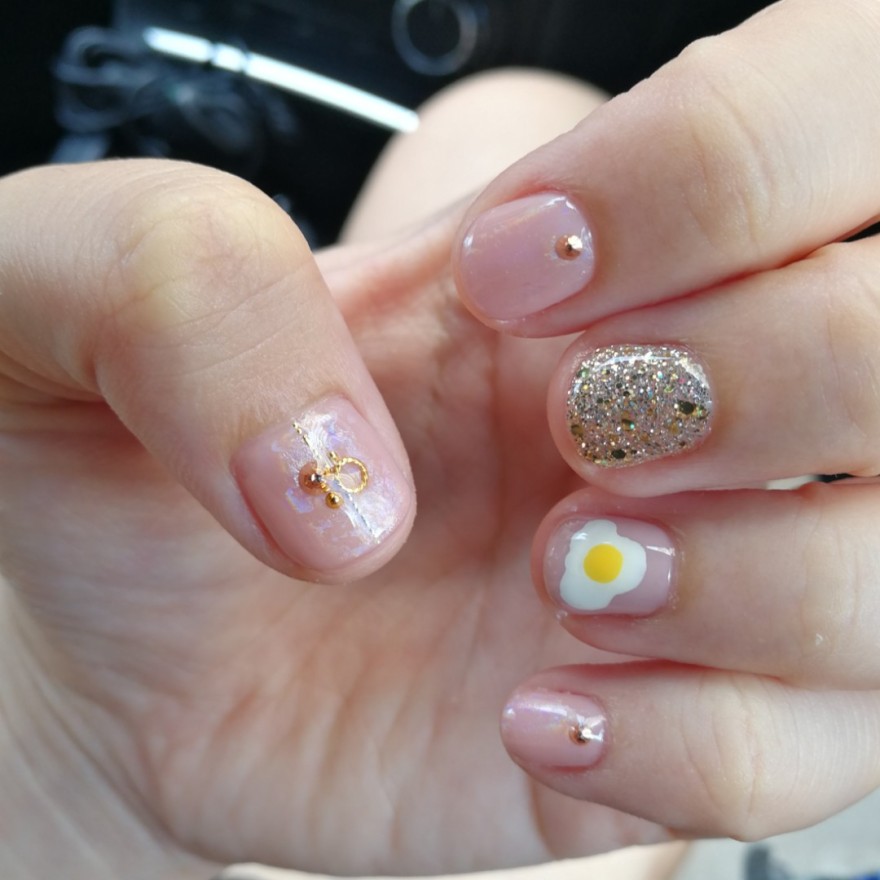 Btw I really liked it!!! I didn't expect myself to like the gold accents and the bling but somehow, this is right up my alley?

I got damn excited halfway through after the shiny foil thing was applied 😅 I kept turning my fingers to see it and going OOOoooOoOOh.

But I am a manicure noob la ok! I don't know all the cool stuff you can do with your nails nowadays but I genuinely liked what Fiona did for me.

I didn't even have to choose the shade of nude pink???

Just left it to the pro. The last time I had to choose the nude pink the manicurist painted it on my fingers and got me to choose the colours 🙃

Can I just say that if I didn't get the chowdan I would have felt that the manicure was too ladylike for me.

But with the 🍳 it's perfect!!! Haha Fiona was super cute. I told her to just use the egg emoji so she blew it up on her phone and copied it. ✌️

I have really short nails so everytime I go for a mani I'll choose the most basic designs ever because I feel that there isn't space for the manicurist to do her work.

Sorry I don't like to be mainstream but Fiona is legit good la. Sigh. Now I know what people mean by the dome shaped gel nails that are highly sought after..

This is not sponsored, and is worth all the money I paid and the praises I sang ok.

Plus I'm gonna chiong for the CNY slots once it opens because I already chope the gold ingots design with fortune cat.

Best if she can do it so well, money fall out from my fingers when I shake them ✌️

Lol sorry cannot get enough of this egg. 🍳🍳

My mum come and ask why got birdshit on my finger 😢🙃

Excuse me mother, this is called fashion and you don't understand. ✌️

I think I want eggs on all my fingers next time. @Lebrowniec can? Maybe we can do like…a 3D egg? With like glitter and stuff? Ok? Maybe not? Too crazy?

Now that I have my manicure settled, I can properly update you guys on why I was so busy last night…

I was supposed to sleep at 11pm after my shower (lol old liao so I sleep early) but then I decided to try on this new nubra my manufacturer sent me along with the Pick Me Up Padding restock.

Backstory, I was complaining to him about how nubras can never fit more than a C cup and even then, the glue always falls off after 3 seconds of me sticking it on.

Ok challenge accepted. Let me send you some samples.

And my backside itchy so last night I tried it on (after leaving it in a corner for days 🙃) and omg??

This is the first stick on bra that has lasted on me for more than 6 hours.

Freaking hilarious. The moment I realised the true powers of the chicken cutlet bralette, I took to IG to explain myself 😅

Firstly, cos of my ranting, the manufacturer made moulds for the nubra samples to be made in sizes from A to F cup!

Because I'm damn rachet, I used my Curel lotion to test the stickiness 😅

I want to say that I am not a pioneer of this testing method, my manufacturer used a bottle of mineral water to demonstrate the stickiness to me while we were chatting on WeChat.

And then I decided…since I'm already demoing, might as well do the water bottle test right?

This is seriously some good shit. I sent my manufacturer a dozen voice messages to praise him. 🙄 To his amusement haha. Cos he said 我们是一等一的厂家

In case I get accused of "using my body to sell my products" 🙄🙄🙄 this comment is very yesterday, just like you are 🙄🙄🙄

Btw I don't use the chicken cutlets with the aim of creating cleavage. I wear them cos sometimes no choice you just have a backless strapless dress.

It's a wardrobe essential but I don't recommend wearing too often cos it is bad for the skin too.

This is how it looks like when it is worn properly.

Basically, you have the position the cups so that they are under your armpit and on the top of your boobs rather than in the middle area of your chest.

#dayrebrides if you're looking for a nubra you should join our beta launch on our website now!

Beta prices are almost 50% off and super worth it. We just need you to provide feedback after! ✌️

After 12 hours of hanging out and moving and driving and talking and laughing.

You may think I'm biased about this but we didn't even intend to bring these in until I tried them for myself.

And I am sold. I've never had faith in these stick on Bralettes and always thought they were a myth for bigger boobed girls or sweaty girls. But.

👍 This one has my vote of confidence. I donno how the dudes at the factory do it. But I am hugely pleased with this.

My nagging paid off.

Does it hurt when removing the CCB?

Ok, so I've tried 2 ways of removing it, one is to rip it off by just yanking the edges and the other is to carefully roll it off.

I've realised that both methods are not particularly painful except near the nipples (even then it's not like OUCH damn pain kind. Taking off nipple stickers hurt more).

But the rolling method preserves the gel much better. If you yank, the gel will detach from the cup. Then spoil liao.

If you yank too hard or rub too hard when you wash, because the gel is so sticky, it might detach the gel from the base of the cup.

It is still wearable (I wore mine the entire day and no problem still cos the gel will even out after awhile) but then it would have been damaged.

What about sweat and moving around alot?

I was actually quite conscious in the beginning and I realised I was abit subconsciously kiapping my hands together to press down on the sides of the cups.

But I realised it was cos I didn't stick the right side on high enough and far enough to the sides. So the important part is to cover the upper and sides (near the armpit) of your boobs.

The bottom part even if isn't fully covered is ok!

Even with sweat and my nephew stepping on me it stayed!

I have small boobs, will this work?

Ok tbh I always feel like because I am bigger sized and have bigger boobs, the TTGs feel like they can't wear what I can wear.

Which is why sometimes I'm very reluctant to post reviews cos I think it doesn't show the entire picture!

But I've passed this to friends and family and so far because of it's stickiness, it really helps in providing the coverage and support needed for all sizes.

Updates: Day 2 with the CCB

I'm starving and in the salon getting my hair done 🙃

Which bride falls sick before their wedding?????

But anyway, I thought I wouldn't put on the CCB today but idk why I reached for it this morning and even chose a low back top to match it.

🙄 This feels really weird. But I thought since I'm wearing it again I'll provide more updates.

Since I'm the alpha test and you guys beta 😅

After you shower, you'll need to dry yourself thoroughly with a towel and then let your upper body air dry for awhile before putting the CCB on.

Usually while letting it air dry I will dress my bottom or shave/put deodorant etc. By then should be ok to put on the CCB alr.

And then don't put moisturizer on your boobs haha.

Basically oils will reduce the stickiness so if your body soap is the kind with moisturizer maybe you want to…use another one on that day? 🙃

Then you need to pull the lace as far apart as possible so you can position both sides near the edges of your chest aka near the armpit.

Haha. But basically stick one side first, near the top of your boob and the outer wing near to the armpit. Then when you're trying to stick the other cup you need to push the boob to face the center and stick the wing edge near the armpit.

Finally done at the salon.

I was only supposed to get a trim + dye job. But my mother kept egging my uncle (who is the one cutting my hair) to go shorter while I was on the phone.

And before I knew it. Wtf my hair was gone.

I'm quite sad because I wanted to keep my hair long so I could at least curl it as a contingency hair style for the wedding.

Which bride destroys their hair a week before the wedding?

I was extremely annoyed and frustrated for the first few minutes.

My hair was almost waist length 🙃

But then I reminded myself that she was the one who made an appointment for me, dragged my lazy ass out to the salon and paid for it.

And she doesn't deserve any of my bratty behaviours.

Short hair then short la! I'm pretty sure I can rock it anyway 👍