I was refreshing images for one of our FB ads and as usual, on first attempt at publishing, our ad was disapproved.

This is nothing new to me because since Day 1 of placing ads for OBC, Facebook has been disapprobing each one by default.

Probably (more like definitely) because we are a lingerie brand.

But nevermind. I can play this game.

Usually this works and the ad is approved.

I don't know who approves it, and if they take the time to read the messages or what, but I think my Facebook lucky stars ran out this evening or some grouchy dude happened to be the one screening through the ads.

he denied my appeal.

So I wrote in to ask him why, because I have an ad with almost the exact images, running right now and I am constantly bombarded with ads from other lingerie brands that are more suggestive and explicit in nature.

You know what he replied?

He said that it's because the pictures were too zoomed in on the breast and it dehumanises the model (which is me wtf) and treats the model like an object rather than a human.

And guess what. I was pretty fucking offended.

Firstly, I zoom in on the photos because I don't wear make up during the shoots and also because I want to protect the anonymity of my models.

If they say they don't wanna show their face. I'm like ok no problem.

Also, if he had done his homework and taken a look at the reviews on our page, he'd realise how we empower women and help them see their own beauty.

If you're willing to put in so much resources into setting up an ad screening team, then please train your team to be smart enough to screen the entire brand. And not just an ad can???

Which brings me to the point of…

Why are we so afraid to talk about lingerie?

I know my mother comes from an era where having your bra strap seen by the world is akin to having your tits out and walking down the street (which btw, some people consider to be ok 😅)

But come on, haven't we moved on from that era already? They used to wear sleeved tops and skirts that covered their ankles.

But now, our mini skirts are shorter than denim shorts and our clothes don't even come with straps sometimes.

Why should women be afraid of men walking into the lingerie section at department stores and why should men not shop for lingerie for women?

It's ok for women to choose underwear for men but when men do it for women, it has to be sexualised?

(Btw I have seen super duper sweet husbands who come onto the website, asking for suggestions cos they want their wives to feel comfortable. Men of all ages!!!!! Dating boys, and old married couples)

Why do we have to be ashamed of buying lingerie that isn't plain and nude?

Why do I, as a lingerie brand manager, have to listen to the catcalls and childish banter of teenagers when they walk past our flea stalls?

(No seriously, 9/10 times, teenage boys in a group will whistle, point, and then whisper loudly, "eh this one sexy la, maybe buy for your girlfriend wear for you to see tonight")

Because we don't talk about it enough

Both men and women alike.

We don't talk about lingerie enough. We whisper, we hide, we feel guilty when we think about it.

And that shrouds the topic of lingerie in a mesh of mystery.

For something so common and so necessary, we sure do talk about it like it's some kind of imaginary monster in the room.

I've seen women who come with their children to our fleas then walk away and come back later alone. Then say it's because they are too young to see such things.

And women who send their boyfriends and husbands away, because………….? It's awkward?

I get it. Intimates are meant to be kept intimate and private right?

It's so sad though, because the less we talk about it, the more it remains this mystery. And this association of lingerie with sex and all things forbidden? It'll never go away.

I've had girls coming to ask me if I'm shameless and if my husband knows I put pictures of myself in lingerie only online. Then when I click on their profiles, they pose in 2 piece bathing suits.

And that's ok because you know, one is a bathing suit, it's functional. Unlike lingerie.

Funny thing tho, cos sometimes our bralettes cover more flesh than a bathing suit would.

Do the words sting? Of course they do. Why else would I be so mad at Facebook?

But do they sting with embarrassment?

But not because I am embarrassed of myself or what I'm doing.

But because I'm embarrassed that as a society, we're still so damn narrow minded while pretending to be progressive.

By the way, did you know 70% of the women who come to our website for the first time don't know their actual bra size or have it wrong?

We don't talk about it enough for girls to know that it's not ok for the cups to be half filled and not ok for underwire to leave angry brown scars on their busts.

We don't talk about it enough to know that almost EVERYONE has breasts that fall to the side when they don't wear a bra and that breasts don't look like two perfectly sculpted canteloupes without a bra.

And that it is ok to not have perfectly round shaped breasts.

We can do better

And we are doing better.

It's just that incidents like this always make me so mad and upset that we still have a blanket rule towards lingerie in general.

I understand that safeguards like this help prevent people from exploiting ads for unhealthy stuff, but it still drives me crazy knowing that people find it justified to put a label on us just because we sell lingerie.

And tell us in our face to look for a model that's more "loose" with their character and morals.

Needless to say, I lost all respect for that individual after our email correspondence.

But for every poopy incident that lands on my calendar there are good ones too.

Like when that 60 year old husband came onto our website asking for advice. And mistook the band size we mentioned for his wife's age (😂)

And the boyfriends who come to the site looking for surprises for their girlfriends, specifying comfy designs only. Sexiness is secondary and a bonus.

Also, the girlfriends who bring boyfriends to our flea and ask for their opinion (not because they want to please the man, but because everyone could use a second opinion sometimes).

And the men who always tell their wives and girlfriends to "choose this one! This one softer!"

You all make my life a little easier and this uphill climb in making a dent in the lingerie industry a little more enjoyable.

One year in from when we first started OBC and I'm already happy enough with what we've achieved.

Not money wise. Money wise we could always do better (haha)

But brand and community wise, I think we are doing a pretty decent job.

And I think that's what we're gonna keep doing.

Disapprove my ads all you want FB, I'll find a way to convince you that not all lingerie brands dehumanise their models by zooming in to their chests.

At least we don't force our models to have a D cup yet be a Size 0.

And we don't force them to skip meals before a shoot.

I walk my talk and I stick by our brand principles.

And maybe one day, Zuckerberg will see this and realise that he can whitelist my ads 🙄

I'll probably die before that day comes la. Zuckerberg too busy building AI robots that will soon take over the world.

All the anger has left my body through my thumbs as I typed this post. Cannot go to sleep annoyed or I'll grown and have perma wrinkles. Daniel has photos to prove that when I go to sleep angry, I frown in my sleep.

I am also super 记仇. If you cross me once….man I'll remember for freaking ever. Forgive but don't forget.

I'm awake and even tho I want to say I'm not angry anymore, I am still very bitter 😂

Uh, this is my personal endeavour, nothing to do with OBC haha. Just that my 🌵 manufacturer has a friend that sells amazing rayon silk PJs and I'm buying them for myself for the new year.

So I opened up an offer to the girls in the OBCHICKS group to bring in some for them. Then I thought. Might as well post here also. Since I'm already going to collate 😅

Here's a set I previously purchased from them. It's a 3 piece set, consists of robe, camisole and shorts, for $48sgd.

Quality is really good la. It's stretchy Rayon and the colour doesn't run.

I split the set up and wore the robe + shorts to a movie night with Daniel.

And then wore the camisole with some black shorts as a work outfit.

Ok what. I think it's damn worth it.

Btw if you go and search on Taobao, you'll find that there are multiple similar looking listings and some going for as cheap as $10/$20 per set but uh, the quality is different la.

I've been searching for good quality manmade silk (rayon) for a long time. Most of them don't feel good, alot have colour runs and 90% aren't stretchy.

I used to dislike lounge wear and I think I still don't really like overly fancy ones but these have changed my mind.

The rayon is stretchy enough for comfort and soft and cool to the touch! I think material really makes a difference la! 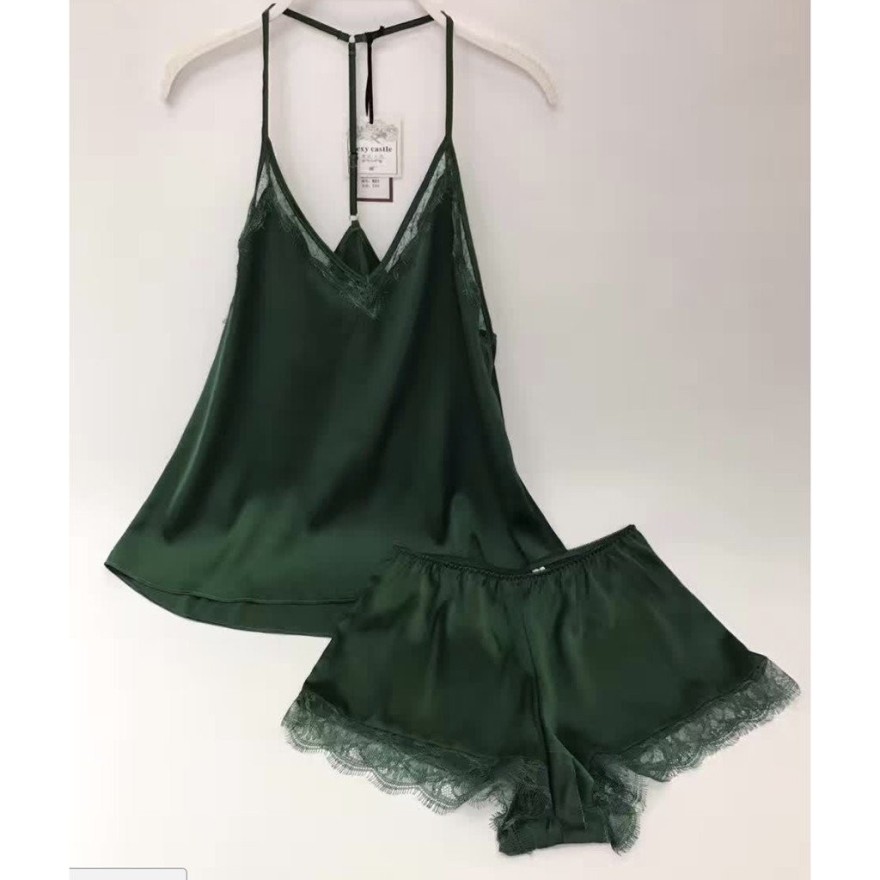 I also own this set in the exact same colour! This one I wore during Christmas haha. But then I changed out cos I was sweaty.

But ya, their products have been consistently good in quality.

Ok guess who found a pic? 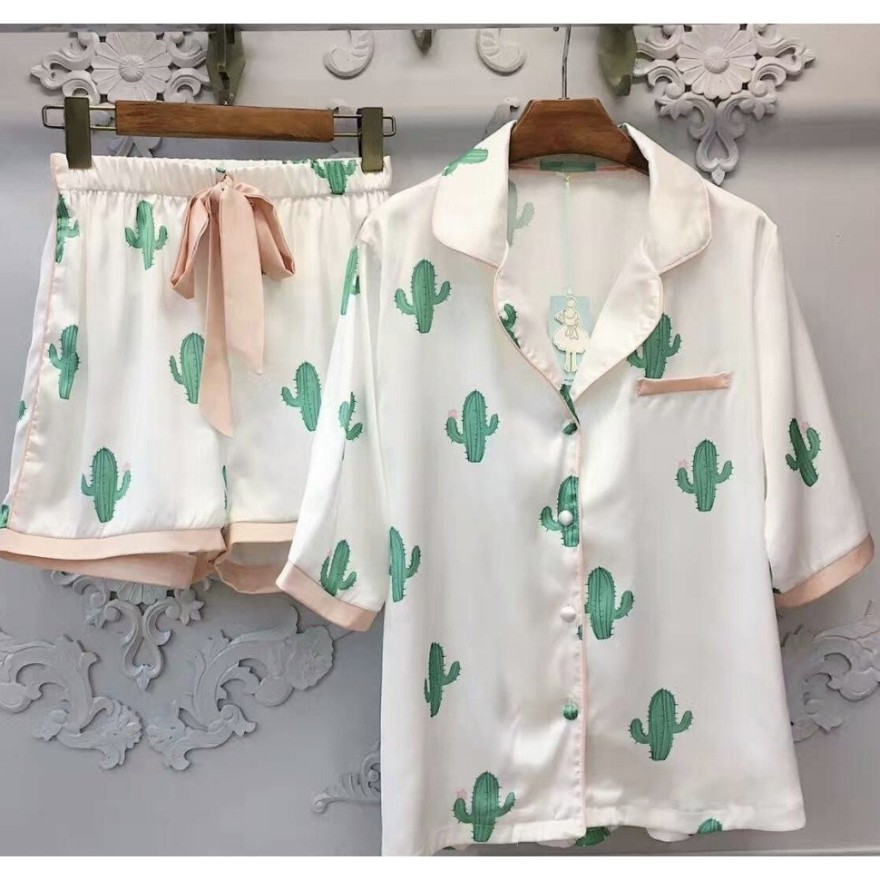 One of the designs I'm getting for myself this time is the cacti PJs!

I also want to say that you will be able to find the exact same picture on Taobao selling the same thing, but I'm buying from this manufacturer so quality is better. I personally find the rayon silk material much better than the ones I've ever bought from Taobao.

So disclaimer, you'll be able the same design for maybe $30?

Like very mild one la. Daniel say it's cos the material 不透风 😂

After finding the photo, I immediately dug out the green cami to wear 😚😚

I guess why I'm ok with spending more on these is cos they aren't just home clothes? Cool enough to be worn out also!

But confession time…I still sleep in my old t shirts 😂